HAC as an embedded compiler

Here is an example to illustrate how the HAC compiler is embedded in an Ada application.

The user of the application has typically only an executable (built with a "full Ada" system like GNAT) and an "Ada-pplet" (can be a few lines) that is run from that executable.

Normally, applications have different languages for building the application and for the embedded script system: Excel is written in C/C++ but embeds VBA (Visual Basic for Applications). 3D Studio Max has MaxScript. GIMP uses Script-fu, a variant of Scheme. Others use Lua or Python. Of course nobody would think about shipping a software with a scripting language where you have to fight with pointers and conditional compilation (C/C++).

But... how about an application that is written in a compiled language, but is using the same language for its scripting purposes? Since a few days, it is possible with HAC (the HAC Ada Compiler).

Messages as "Native" are from the main application.

Messages as "HAC" are from the small HAC program that is run from the application.

A little disadvantage of having the same language on both sides... is that it is the same language! It could be confusing at first glance. Plus, it is not in the tradition. That may be disturbing for a number of people.

A big advantage of having the same language is that you can share some pieces of code. For instance the following package is used for building the demo application, and compiled by HAC when the application is running!


HAC (HAC Ada Compiler) is a quick, small, open-source Ada compiler, covering a subset of the Ada language. HAC is itself fully programmed in Ada.

HAC (HAC Ada Compiler) is a quick, small, open-source Ada
compiler, covering a subset of the Ada language.
HAC is itself fully programmed in Ada.

Web site: http://hacadacompiler.sf.net/
From there, links to sources, and an executable for Windows.

- the compiler performs more compile-time range checks and
optimizes away useless run-time checks when it's safe to do so.

On the very top of the Zip-Ada to-do list, for a while, was the support for archive containing large (more than 4 GiB data) or numerous (more than 65535) files – the so-called "Zip64" extensions.

It's now gone from the to-do list and done in the project.

The Zip archive format was defined with 32-bit file sizes and 16-bit number of files. At the time (1989) it was a perfectly sound choice, especially given that the software, PKZIP, was written for 16-bit PC's running on MS-DOS. At some point, these limits began to be problematic for archiving or backup tasks. Although the original Zip format is still the most widely used (including many file types without the .zip name extension, such as .docx, .xlsx, .pptx, .jar), the limits become, slowly, more and more frequently an issue over time. Consequently, PKWARE (the firm behind PKZIP) has introduced, around year 2000, a set of format extensions to overcome those limitations. Given the omnipresence of Zip archives and the difficulty to innovate in software, PKWARE did not opt for a fresh, new, simple, but incompatible format. Instead, they designed a set of extensions, allowed by the flexibility of the Zip format. This seems clumsy and over-engineered, but the design is actually quite clever: a program can create a Zip archive, without size limitations, and without checking in advance whether the Zip64 extensions are needed or not. When the archive is finished, either the Zip64 extensions were not needed and the archive is conform to the year 1989 original format, or they were – then, an unpacker for that archive file has to know about Zip64. Thus, the Zip64 design allowed for a progressive adoption of the new format, since the actual need went progressively from very rare to a bit less rare.

How to implement Zip64 in a new software? There are a few options, which you can combine:

All three are very time-consuming (especially, the documentation, aimed at maintaining the openness of the Zip format, is "legally" correct but lacks some indications and practical details).
Even widespread, commercial software (with paying customers and many paid programmers behind it) does not support Zip64 (e.g. Microsoft Word for .docx), or took almost two decades to do so (Microsoft Windows for instance). It reveals something about the time and costs related to the implementation…

Fortunately, a very helpful person called Yaakov not only did an implementation from scratch, but also was kind enough to share his experience in an explanatory and colorful way, with a simple example as an illustration. The article is available here: ZIP64 - Go Big Or Go Home.
I show here (with permission) the key diagram of his article:

The Zip64 extensions are in dark background and white letters.
The part with the archived (eventually compressed) files is in pink and brown. In that example, there is only one file in the archive.

As you see, an implementation of Zip64 may be quite tricky, but it is feasible, if we have "the big picture" before our eyes.

Alas, things are a little bit more complicated than it appears when reading the article too fast...

We want, with Zip-Ada, to decode and unpack correctly archives not only made by Zip-Ada, but also by Info-Zip's Zip, 7-Zip, WinZip, and so on (the converse is also true: we want the other guys to be able to unpack our Zip-Ada archives).
For that reason, we need to anticipate all possible ways the data headers have been written, not only our choices. In that respect, we have had some headache with the per-entry "size" Zip64 extensions (the parts in brown and dark green in the chart).
The documentation (4.5.3) describes, for that, a record with a variable number of values:

and defines in plain English some rules about the order and in which circumstances the values are present or not.

When it is time for the archiving program to write the Central Directory (the part that concludes the archive, in green, light and dark, in the chart), all information about sizes is known. An archiving program may choose to put only the necessary values in 64 bits. However, traditionally, you would expect that the variable record's contents are self-describing and would contain [A], or: [A] and [B], or: [A] and [B] and [C], or: [A] and [B] and [C] and [D], given the record's size.
With Zip64, it is not the case: each field is optional. This micro-optimization is ridiculous given the fact that the size of archive is breaking the 4 GiB limit. To make things worse, the documentation is not clear about that full optionality.
An archiver (7-Zip does so for instance) may put just [A], the uncompressed size of one first large file that is well compressible, or just [C], the offset of one small file following a file with a large size in the archive. Or it could put [A], [B], [C] in both cases (as we do for Zip-Ada's archive creation). So, we've adapted the archive reader to take all possible cases into consideration.

Thanks to Nicolas Brunot for pointing that (hopefully) ultimate difficulty with Zip64.

HAC (HAC Ada Compiler) is a quick, small, open-source Ada
compiler, covering a subset of the Ada language.
HAC is itself fully programmed in Ada.

Web site: http://hacadacompiler.sf.net/
From there, links to sources and an executable for Windows.

- packages and subpackages are now supported
- modularity: packages and subprograms can be standalone
library units, stored in individual files with
GNAT's naming convention, and accessed from other units
via the WITH clause
- validity checks were added for a better detection of
uninitialized variables.

Package examples and modularity tests have been added.
Particularly, a new PDF producer package with a few demos
is located in the ./exm/pdf directory. 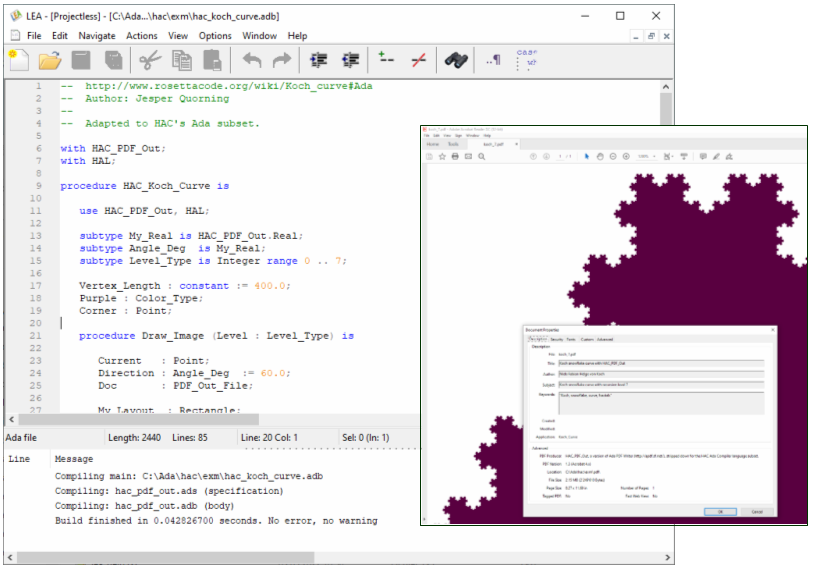 Gautier
__
PS: for Windows, there is an integrated editor that embeds HAC:
LEA: http://l-e-a.sf.net
PPS: HAC will be shown at the Ada-Europe conference (presentation + tutorial)
http://www.ada-europe.org/conference2022/

In order to illustrate a feature, what is better than a visual example?
In our case, the feature is the modularity, recently implemented in HAC (the HAC Ada Compiler).
So, a nice exercise was to try with a "real" visual package, PDF_Out (project Ada PDF Writer, link here).
Of course, HAC is still a small compiler project which doesn't cover all the sexy features of Ada - even those of the first version of Ada, Ada 1983, which already had extensive generics, aggregates (on-the-fly composite objects as expressions), default values in records or in subprogram parameters, exceptions or user-defined operators.
The easy way of down-stripping PDF_Out for HAC was to open the source code in the LEA editor (link here), and do frenetically and iteratively:

A few things that needed a downgrade for the HAC 0.1 language subset were:

The result can be seen here: 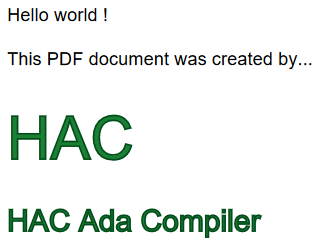 You can experiment it yourself by checking out or cloning the latest version of HAC:

The new PDF examples are located in the subdirectory ./exm/pdf

OK, there is still a slight limitation: library-level packages cannot contain variables and constants, nor an initialization part (begin .. end). Removing this limitation would be complex to implement and is postponed so far for HAC.

A new modularity demo can be found in the "exm" subdirectory.
The main file is "pkg_demo.adb".
It is a simple test for simulating the build of an application with numerous dependencies.
The dependencies take form of packages depending on two or more other packages, down to
a certain recursion depth.
Each package contains a procedure with the same name: "Do_it", which just writes a string related to the package name. For instance,  X_Pkg_Demo_B3.Do_it will write "[B3]", then call X_Pkg_Demo_B31.Do_it, X_Pkg_Demo_B32.Do_it, and X_Pkg_Demo_B33.Do_it.
The package dependencies can be seen the following chart: 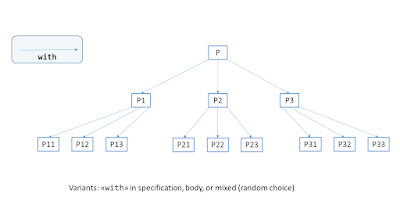 NB: the depth and number of children can be set as you wish.

How to run the demo?
First, we generate the package tree.
For that, assume you have the "hac[.exe]" executable ready in the main directory.
Note: in what follows, replace '/' by '\' if you are on Windows.
In the "exm" directory, run from the command line: "../hac pkg_demo_gen.adb".
Alternatively, from LEA, load "pkg_demo_gen.adb" and run it (F9).
The packages ("x_*" files) will be generated.

If you are curious about how HAC does the whole build the 40 units (main procedure and 39 packages),
add the "-v2" option to the build command: "../hac -v2 pkg_demo.adb".
On an i7 machine (with HAC itself built in "Fast" mode), the time elapsed
for the entire build is around 0.08 seconds. Only one core is used.
Since GNAT builds also the library "on the fly" by automatically
finding dependencies, you can see it in action by doing:
"gnatmake -I../src -j0 pkg_demo"
Interestingly, GNAT compiles the packages for each depth successively.
Then you can see the result by doing:
"./pkg_demo"
Of course, it's identical to HAC's.

HAC (the HAC Ada Compiler) is a small, quick, open-source Ada compiler,
covering a subset of the Ada language.
HAC is itself fully programmed in Ada.

Since a few commits, HAC parses packages! But so far there are limitations : it's "work in progress".

Nevertheless you can already play a bit with the things already programmed in HAC.

Now, from the command-line (assume you are in the main hac directory), do:

If you want a more complex example of how HAC can create the library "on the fly" by compiling recursively everything needed to build the main procedure, it is already in the examples (subdirectory exm):

HAC (HAC Ada Compiler) is a small, quick, open-source Ada compiler,
covering a subset of the Ada language.
HAC is itself fully programmed in Ada.

HAC as an embedded compiler

Here is an example to illustrate how the HAC compiler is embedded in an Ada application. The user of the application has typically only an e...

Search in this blog